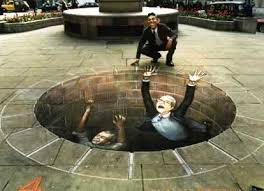 I came across Portia Nelson’s wonderful “Autobiography in Five Short Chapters” recently and wanted to share it here. It encapsulates perfectly the challenging and often painstaking process of changing our most entrenched and destructive patterns of mind.

“There’s a Hole in My Sidewalk”

I walk down the street.
There is a deep hole in the sidewalk.
I fall in.
I am lost… I am helpless.
It isn’t my fault.
It takes forever to find a way out.

I walk down the same street.
There is a deep hole in the sidewalk.
I pretend I don’t see it.
I fall in again.
I can’t believe I am in the same place.
But, it isn’t my fault.
It still takes me a long time to get out.

I walk down the same street.
There is a deep hole in the sidewalk.
I see it is there.
I still fall in. It’s a habit.
My eyes are open.
I know where I am.
It is my fault. I get out immediately.

I walk down the same street.
There is a deep hole in the sidewalk.
I walk around it.

I walk down another street.

Since the terrorist attacks in Paris, I’ve also been thinking it applies equally to how we collectively, as a society and political order, approach our most vexing problems — only it’s not clear we ever get past the first couple of chapters.

“I would bring back waterboarding,” declared Republican presidential candidate Donald Trump on ABC News’ Sunday show, This Week with George Stephanopolous, talking about how he would respond to terrorism if he were president.  Surely Trump doesn’t think that’s the answer, given the wealth of evidence that torture undermines rather than promotes national security. But with so many fearful Americans eager to see leaders do something, anything, to ensure their safety, Trump probably figured it would grab more headlines and score him more votes.

Donald Trump is an extreme case, of course, but whether it’s global warming, income inequality or terrorism, there seems to be a general societal instinct to respond immediately to our most entrenched problems with a defensiveness that clouds our ability to see our role in the problem and how our reactions perpetuate it.

An individual wanting to change can make a commitment to approaching the situation with renewed awareness and, eventually, choose to walk down a different path. But how can we do that as a society, in a political system governed by leaders focused only on short-term gains?